The IEEE CIS Distinguished Lecturer Program (DLP) aims at serving the Computational Intelligence community by providing stimulating lectures given by distinguished IEEE CIS professionals and scholars. It also aims at helping young researchers (masters and doctoral students) providing suggestions/guidance on their research problems as well as promoting computational intelligence tools and techniques among undergraduate students to make them interested in CIS fields of interest. Distinguished Lecturers present novel basic and/or applied research results in their CIS sub-field. Their lectures offer insights into the trends and challenges of their CIS sub-field and their vision for the given sub-field. In any given year, selected IEEE CIS Distinguished Lecturers (DLs) have a balanced representation of CIS sub-fields and include representatives from academia, industry and government while spanning different IEEE regions.The program supports local CIS Chapters by enabling a major chapter event which can considerably improve a chapter’s visibility to their existing IEEE CIS members, other IEEE society members and the wider CIS community in their area. It is expected that DLP events actively seek to recruit new CIS professionals to both the CIS field and to IEEE CIS. Source: https://cis.ieee.org/professional-development/dlp.

It should be noted that this program is NOT intended as a means to finance speakers for conferences/workshops or symposia. 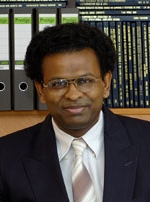 Speaker’s Biography:
Ponnuthurai Nagaratnam Suganthan received the B.A. degree, Postgraduate Certificate and M.A. degree in Electrical and Information Engineering from the University of Cambridge, UK in 1990, 1992 and 1994, respectively. After completing his PhD research in 1995, he served as a pre-doctoral Research Assistant in the Dept. of Electrical Engineering, University of Sydney in 1995–96 and a lecturer in the Dept. of Computer Science and Electrical Engineering, University of Queensland in 1996–99. He moved to NTU in 1999. He was an Editorial Board Member of the Evolutionary Computation Journal, MIT Press (2013 – 2018) and an associate editor of the IEEE Trans on Cybernetics (2012 – 2018). He is an associate editor of Applied Soft Computing (Elsevier, 2018 -), Neurocomputing (Elsevier, 2018 -), IEEE Trans on Evolutionary Computation (2005 -), Information Sciences (Elsevier, 2009 -), Pattern Recognition (Elsevier, 2001 -) and Int. J. of Swarm Intelligence Research (2009 -) Journals. He is a founding co-editor-in-chief of Swarm and Evolutionary Computation (2010 -), an SCI Indexed Elsevier Journal. His co-authored SaDE paper (published in April 2009) won the “IEEE Trans. on Evolutionary Computation outstanding paper award” in 2012. His former PhD student, Dr Jane Jing Liang, won the IEEE CIS Outstanding PhD dissertation award, in 2014. IEEE CIS Singapore Chapter won the best chapter award in Singapore in 2014 for its achievements in 2013 under his leadership. His research interests include swarm and evolutionary algorithms, pattern recognition, forecasting, randomized neural networks, deep learning and applications of swarm, evolutionary & machine learning algorithms. His publications have been well cited (Google Scholar Citations: ~34k). His SCI indexed publications attracted over 1000 SCI citations in a calendar year since 2013. He was selected as one of the highly cited researchers by Thomson Reuters every year from 2015 to 2018 in computer science. He served as the General Chair of the IEEE SSCI 2013. He is an IEEE CIS distinguished lecturer (DLP) in 2018-2020. He has been a member of the IEEE (S’91, M’92, SM’00, Fellow’15) since 1991 and an elected AdCom member of the IEEE Computational Intelligence Society (CIS) in 2014 – 2016.
Speaker’s Email: epnsugan@ntu.edu.sg.
Speaker’s Address: S2-B2a-21, EEE, NTU, Singapore, Singapore, Singapore, 639798.

Slides from the lecture are available at: Randomized Deep-Shallow-ANN